(Note: Names of real life friends have been changed in the following true story to protect, well, me.)

I have a wonderful friend named Sarah. She’s a “bestie” of mine, as the kids say these days. Sarah has a great personality, possesses great compassion in her giving heart, and all-around she’s awesome.

But God and His Only Son Jesus help you if you’re a passenger in her car.

I don’t know the reason why, but when Sarah gets behind the wheel her whole demeanor changes into one more suitable for a “Road Warrior” movie directed by Quentin Tarantino. Her tolerance for other drivers doesn’t just plummet to zero percent, it plunges down to a moral event horizon upon which everyone within a five kilometer radius must fear Sarah’s vehicular wrath.

I suspect that when she was born, the doctor turned to Sarah’s mom and said, “This child is beautiful and perfect in every way, but for God’s sake don’t ever put a steering wheel in her hands.”

Let me tell you about the traumatic driving experience I just had with Sarah as a shrieking passenger in her car. I was waiting outside my apartment for her to arrive and, as usual, Sarah pulled into my building’s parking lot like it was the Indy 500 finishing line. As the thick smoke from her car’s tires cleared and around a dozen of my neighbors walked out on their balconies above me wondering whose engine noise was shaking their windows, I made the usual horrible choice of sitting down in the passenger seat.

“Hi Sarah,” I said to her as I put on my seat belt. The fabric of the thin safety device across my chest was quite frayed and torn from the strain of holding people in the car when Sarah took corners at her typical 79 kilometers per hour.

“So where are we going? Didn’t you say on the phone you — GAH!” My body slammed back in the passenger seat as Sarah accelerated out of the parking lot like a mortar round fired from a battleship’s cannon. Unable to complete my question due to the sudden five G’s crushing my hefty frame, I began mewling like a gut-punched cheerleader as I clawed the dashboard for support.

“Merivale Mall, I have some essential shopping to do and…” Sarah began.

“Oh, God, Merivale Mall, that’s half-way across the city. I might as well make my peace with God right now.”

“Oh, be quiet, I’m a good driver,” Sarah replied with some irritation in her voice. I noticed she had slowed the car down very slightly due to a small red Honda moving at a rational speed in front of us. “Oh, COME ON!” Sarah screamed. She leaned on the horn. HOOOOONNNNNKKKKKK. “Move it, you mouth-breathing son of a bitch bastard FUCK!” Sarah shrieked like an R-rated Popeye The Sailor Man. Then she pulled to the left and drove past the offending car while making an incredibly obscene gesture at the horrified driver staring at us, his face blanched white in fear and shock.

“Jesus, Sarah, you don’t have to shoot them the finger every time!”

“Yes, I do. I wish I could learn sign language so I could tell idiots like that what I really think about them.”

Sarah’s statement left me pondering in some confusion. First off, most people don’t understand American Sign Language. And if they did, would they really want to watch Sarah “yell” at them with her hands? I imagined Sarah furiously signing at a frightened driver beside her on the road: OH YOU SON OF A BITCH. WHAT THE FUCK IS WRONG WITH YOU, SERIOUSLY. <MIDDLE FINGER> <MIDDLE FINGER> <BOTH MIDDLE FINGERS> USE YOUR TURN SIGNAL NEXT TIME OR I’LL RAM YOUR BACK BUMPER LIKE GOD HIMSELF IS GIVING YOU A PROCTOLOGICAL EXAM <MIDDLE FINGER> <SHAKING FIST> <THROAT-CUTTING GESTURE> MORON. Yes, deaf people already have enough to deal with, they don’t need Sarah hand-shrieking at them.

My attention was brought back as Sarah pulled onto the highway. “Oh God, here we go,” I muttered. Reaching a rational and lucid speed of 177 kilometers per (my probably last) hour, Sarah did an impressive three-lane drift as my fingertips dug into the dashboard.

“Sarah,” I pleaded as my knuckles went albino white. “Could you go a little slower, please?”

“Can’t. I have to be home by four o’clock.” Sarah was scanning the highway with a predatory intensity greater than a starving Dracula in a room full of necks.

“Well, I have to be home in one piece,” I replied.

Sarah leaned on the horn again. HONKKK! HHOOOONNNKKK!!! “Oh, COME ON! This guy in front of me is driving so slow!”

“Sarah, he’s following the speed limit. Hell, like everyone else on this highway, he’s driving a few klicks above the speed limit! You don’t have to -”

Sarah’s eye narrowed in seething hate-rage. “Oh, screw this idiot,” she observed, slamming her foot down on the gas pedal. Again my body was pressed back in the firm upholstery of the passenger seat. I could feel the liquid in my eyeballs compress as we reached speeds no human or four-wheeled vehicle should ever attain in a sane world that obeys physics.

We shot past the offending driver on the left, Sarah waving her obscene gesture yet again, the second time in less than four minutes. I recalled that her average count of “flipping the bird” to other drivers was around thirty-seven per trip, but it looked like she was shooting (no pun intended) for the record on this particular fearsome sojourn.

The shocked driver, an elderly woman in her 80’s, dropped her jaw in abject animal terror as Sarah’s car blurred past and almost hip-checked her Prius off the highway. Sarah jerked the steering wheel like a ninja snapping someone’s neck and we drifted in front of the car we’d just passed. I saw the old lady’s eyes in the rear-view mirror, wide and white as fine plates of china.

“Sarah, this isn’t a race, you know,” I managed to gasp out, having great difficulty pulling air into my lungs from the acceleration pressing on my chest.

“Everything’s a race and I’m the winner! Never question me!” She shook her right fist in my face.

“Sarah, please calm down! And slow down!” I shouted in reply. “I think I’m losing my vision from your driving!”

“Bill never questions me!” Sarah declared. Bill was a friend of hers that didn’t complain as much as I did when Sarah got either of us to do something for her.

“That’s because, like me, he’s in a perpetual state of shock and trauma from your driving, woman!” I realized my voice was trembling.

“I’M A GOOD DRIVER DAMN IT! Oh, there’s our exit, you made me lose my attention! Hold on!” Sarah pulled the steering wheel down and to the right like it was a heavy church bell’s rope; the car went into a barely controlled drift punctuated by my screams. Shooting down the Merivale Road off-ramp, I could barely perceive thin vertical patches of color flashing past us. Those colorful standing rectangles were other cars, compressed in my time-frame by the relativistic light speed Sarah’s car was reaching.

As the blood from my head was driven out by the car’s random centrifugal forces, I had a Vision. A tiny Jesus appeared on the dashboard in front of me. He smiled. 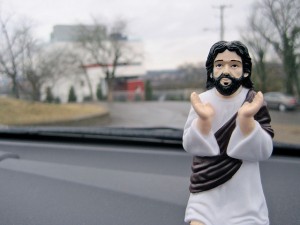 “Looks like you’re having a moment of crisis, my son,” Jesus observed with His kind and compassionate smile.

I nodded, seeing the Savior through my tunnel vision. “Yes, oh Lord. You know I’m an unrepentant Heathen, but please forgive my sins before I get into Heaven, which I know will be soon.”

Sarah rolled down her window and began screaming at a car beside us. “WHERE’D YOU GET YOUR LICENSE YOU ANUS-FACED PLATYPUS?!?” The horrified driver beside us panicked and pulled his vehicle into the next lane, almost smacking into a concrete barrier.

“She always this high-strung?” Jesus asked me.

“Only when driving. Otherwise, Sarah’s a peach.”

“I know she’s a good person, but Jesus Christ she drives like a maniac,” observed the King of Kings. “Anyways, sure, you’re forgiven of all your sins, even the one where you dressed up like Bigfoot and scared people by running through their yards at night.”

“Oh yeah, I remember that, I was thirteen years old, right?”

Jesus shook his head. “No, that was last week. But you are Forgiven. Be thou welcome into Heaven when it’s your time.” Jesus glanced at his wrist watch. “With Sarah at the wheel, I give it about two more minutes.”

“OH, GOD!” Jesus shrieked as Sarah took a corner so sharp and fast that my side of the car lifted off the ground. “I’m outta here, bud. You’re on your own.” With that statement, Jesus disappeared.

Sarah drove into the Merivale Mall’s parking lot with all the subtlety of a gang of Vikings entering a church. Shoppers flung themselves bodily out of the way as Sarah steered her car towards a parking spot being vacated by a large brown family sedan.

“MOVE IT!” Sarah screamed at the sedan after waiting patiently for 0.00002 seconds. “COME ON!”

“Sarah, stop! That car has a handicap parking permit, give them some time!”

She shot me a look of anger and contempt. “Well, they’re going to need two handicap permits if they don’t get out of that parking space!” Sarah began making obscene gestures towards the sedan as its driver pulled out. He glanced at Sarah in irritation as he drove past us, making Sarah swear out loud bilingually. “FUCK YOU! VA TE FAIRE FOUTRE! TABERNAK! ASSHOLE!” Her hands became a blur as she “flipped the bird” to the guy in both English and French (and I suspect some other languages).

After parking the car, its outer hull glowing a dull red from air friction, I kissed the ground like The Pope disembarking an airplane. The asphalt didn’t taste very good, but I was thankful that I could still taste things because I was, well, still alive.

“You need anything in the mall?” Sarah asked me nonchalantly as we walked towards the main entrance.

“NO, YOU’RE NOT!” I began yelling, a rare thing for me to do. “I NEARLY FEAR-SHIT MYSELF TO DEATH ON THE TRIP HERE!”

“Oh, stop it,” Sarah laughed. She playfully whacked my rib cage with her purse. I staggered back a few steps from the impact. “Stop yelling, people are staring.”

“PEOPLE ARE STARING BECAUSE YOU PULLED INTO THE PARKING LOT AT VEHICULAR TERMINAL VELOCITY! THE ASPHALT RODE UP LIKE A BEDSHEET AROUND YOUR FRONT TIRES WHEN YOU BRAKED!”

“You know, Bill wouldn’t be complaining -”

“BILL NEVER COMPLAINS! HE WOULDN’T SAY BOO IF YOU DROVE OFF A PIER INTO THE RIDEAU RIVER AT MACH THREE! WHICH I’M POSITIVE YOU HAVE!”

Sarah rolled her eyes as if I was the crazy one.

“NEVER… Never mind,” I said, regaining some composure. “What are you going to buy at the mall?”

“Oh, nothing. I’m just going to look at some clothes.”

“YOU MEAN WE CAME HERE FOR NOTHING?!? YOU SAID YOU HAD TO, AND I QUOTE, ‘DO SOME ESSENTIAL SHOPPING’!!!”

Sarah shook her head. “Nah, changed my mind. You can buy me a Frappicino if you want, though.”

“And after we’re done at the mall I’ll drive you home. But I’ll have to make it fast.”

And that’s how I saw Jesus.